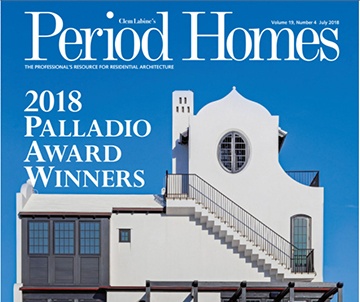 When a couple with two children commissioned Jeffrey Dungan, AIA, ICAA, to design a beach house, he leveraged the site’s small space to erect some big ideas. Size wasn’t the only challenging restriction: The planned community in Alys Beach, Florida, designed by Andrés Duany, mandated that the attached house be made of concrete to withstand hurricane- force winds and that it be in white stucco in a Moorish or Bermudan style suitable for its location near the Gulf of Mexico amid hundreds of other units. “My design was influenced by memories of Gothic and Moorish architecture during travels to Barcelona,” he says. “There’s a playfulness and a fluidity to the villa’s style, which incorporates modern moments like expanses of windows.”

Because he could not expand horizontally— the site was only 40 feet by 40 feet—Dungan went up, creating a tower on the partial fourth-floor that features a 10-foot by 10-foot glassed-in den, complete with a gas fireplace and cathedral ceiling, that also can serve as sleeping quarters. “The tower’s shape is reminiscent of childhood treehouses and forts,” he says, adding that he was allowed to add this statement story because the house faces the green, a major public space that overlooks the gulf. “It’s a romantic hideaway, a catbird seat because you can see the town and beach and ocean from 40 feet high”.

Reaching for the sky allowed Dungan to create an indoor-outdoor house that maximized water views and that includes a two-car garage, three bedrooms, two living spaces, five outdoor spaces and a swimming pool. One of the more noticeable and interesting space savers is the exterior cantilevered stairway. “It is a sculptural element,” he says. “It was made possible because the house is concrete. I’ve never had the opportunity to do another like it.”